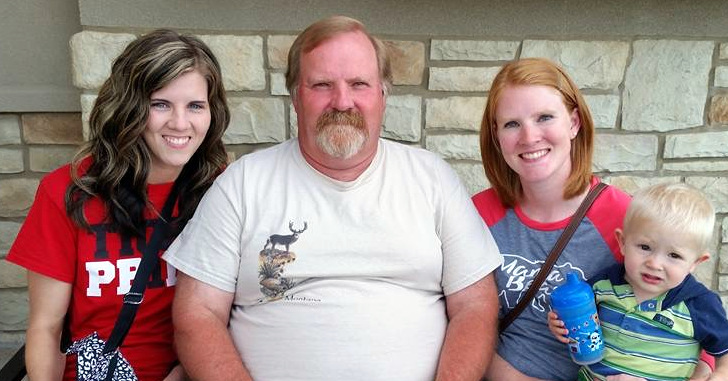 Payne family memories are made in the great outdoors

While Father’s Day may include gifting dad with a new tie, tools, bacon of the month club membership or hand-drawn picture, it’s also about spending time together and making memories.

“My children make every Father’s Day special. Sometimes we have a cookout, and sometimes we go out to eat. The thing that makes it special for me is being able to spend the day with the children and grandchildren,” said Jim Payne, environmental services director at Rolla Presbyterian Manor.

Spending the day with Jim is just as special to his six children and 15 grandchildren.

“We usually spend each Father’s Day hanging out at his house on the farm and will either barbeque or have a fish fry. My dad will then take the grandkids on a four-wheeler ride around the farm and check on the cows and horses. We just have a great time spending the day outdoors,” said Ashley Day, Jim’s daughter.

Creating memories outdoors together is something that’s been in the family for decades.

“My dad passed away over 30 years ago, but to this day I can still hear his voice and remember the times we had together,” Jim said. “I come from a large and close family. I have 10 brothers and sisters, and dad worked very hard to make sure we had what we needed. Dad was an avid outdoorsman. I remember him being up before daylight and working all day taking care of the livestock, garden, etc. The thing that he enjoyed the most was his coonhounds. I remember many cold winter nights spent with him in the woods listening to his hounds run.”

Jim’s daughter, Andrea Otto, shared a special memory with her dad that took place outdoors, too.

“The most special memory I have with my dad was when I shot my first deer. He had built a deer stand that stood about 30 feet in the air. It was like a little house up there. We went out early one morning and climbed up there. I then fell asleep (like I usually did). He woke me up when he saw the deer was about 150 yards away. He helped me steady my gun because I was so nervous. I took my shot and the deer jumped straight up and took off. Dad told me that was a good sign. I was breathing so hard and was so excited. We climbed down and went looking for it. It didn't take long to find it. We were both so excited!”

Aside from their love of the great outdoors, Jim and his daughters share a number of similarities.

“I am just a duplicate of my dad in female form. I look just like him, and we have the same personality. We are pretty laid back but if a serious problem arises, we get after solving it. I couldn't be prouder to take after my dad in so many ways,” said Andrea.

“I get my blue eyes from my dad, and we are very similar in personality. We both tend to be more on the quiet side but aren't afraid to speak up if a problem arises. We also share an enjoyment of a lot of the same hobbies, and my love for the country and outdoors I all owe to him,” said Ashley.

“My dad is hands down the best dad, and I feel so blessed to have him as my dad! Anytime any of his family needs something, he is willing to help out anyway he can,” Ashley continued. “He has fixed my vehicles more times than I can count, he spent many hours helping my husband and I build our house, and he has been patient with me growing up in the deer stand and teaching me how to drive. He loves his family more than anything and will do anything for all of us.”

“I think I hit the jackpot when it comes to my dad. I'm convinced there's really nothing he can't fix. Car problems, house problems, life problems, etc. He always has a fix! He is there for us no matter the occasion or circumstance. And he's doing the same for his grandkids!”

Being there for his family – watching them grow up – has been what Jim’s enjoyed most about being a dad.

“They say that you grow up to be like your parents, and I believe there is a lot of truth to that. Shortly after I graduated high school, I was following my own hounds through the woods at night. Now I have a farm with cattle, horses and a garden. I picked up a lot of positive traits from my dad, and I hope I have passed those on to my own children. I am very proud of each and every one of them. I enjoyed watching them play sports as children and grow into educated, responsible adults who are now raising and coaching their own children,” said Jim.

Middle photo shows Jim with Andrea who said, “I am just a duplicate of my dad in female form.”

Bottom photo has Jim with Ashley Day who said, “I get my blue eyes from my dad and we are very similar in personality.”

Posted on
by
Cindy PMMA
filled under
Employees
« Back to Blog